Can I ride forever?

When I posted on my visit to Coney Island to watch the Polar Bear Club take their annual New Year’s dip, I mention that I was resolved to return there and ride the Cyclone Roller Coaster. Well I did, and here’s a movie about my little hometown adventure:

In 1979, a movie named The Warriors was made, and its since become a cult favorite. It follows the adventures of a bunch of New York Theme Gangs who for reasons I won’t go into here are chasing the Warriors, a gang that happens to hail from Coney Island!

It’s based on Sol Yurick’s 1965 novel, which is loosely based on an ancient Greek story called Anabasis, which I am not familiar with and offer the factoid for those that are. The most concise movie review I saw on Rotten Tomatoes was by reviewer Bob Stinson, who offered: “Welcome Back Kotter meets A Clockwork Orange.” Nearly perfect.

So what’s a Theme Gang you ask? How about guys dressed up in baseball uniforms (nice until you see them swinging their bats at people’s heads), calypso dancers, suspendered mimes with top hats, a bunch of black dudes wearing satiny Kung Fu fighting robes (I think), and a group of gum–snapping, tough talking city girls who can probably kick all their asses.

Here are some scenes that didn’t make it into the original movie, but I’m including them because of several great shots of the Coney Island boardwalk, many with the Cyclone in the background.

The movie presages the whole dystopian craze that’s overtaken popular American literature and entertainment. Best of all, it is a travelogue through seamier NY, and what it looked like in the late seventies. I’ll leave you with the movie’s trailer:

Lever House as shot from the Seagram’s Building Plaza

Lever House was the second glass-box skyscraper built in New York, designed by adherents of Ludwig Mies van der Rohe’s International style of architecture. It was completed in 1952, and was the second to utilize a curtain wall exterior (the United Nations was the first). It has an innovative courtyard and public space, and a relatively small, glass enclosed lobby at street level. I spent a lot of time inside this building in the eighties, and snapped this picture last Saint Patrick’s day.

Lever House marked the transition of Park Avenue from a boulevard of masonry apartment buildings to one of glass, big-company office towers. It was declared a NYC Landmark in 1982, and went on the National Register the following year.

It was the pet project of Lever Brothers president Charles Luckman, who was described by most as a bona fide wunderkind. He left Lever prior to the building’s completion and returned to his first love — architecture, and boy, did he! He designed Madison Square Garden, the Aon Center in L.A., buidlings for the Kennedy and Johnson Space Centers and was part of the team that built that space-shippy looking building at LAX.

Across Park Avenue and on the south side of 53rd street stands the Seagram Building. Up until the early nineteen hundreds, it was where Steinway pianos were built. It is another building where I spent some time, but more about that later.

It was completed in 1958, and its primary design was by none other than Mies van der Rohe. This photo was taken at its base from its much admired plaza. 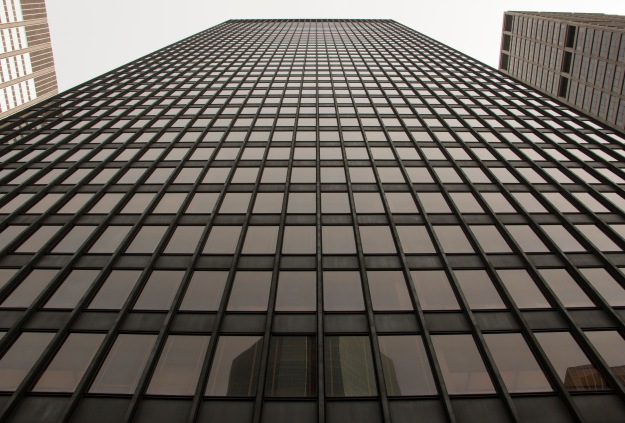 It was built on a steel frame from which non-structural glass walls were hung. Mies felt the building should externally articulate its physical structure and wanted its frame to be visible — but NYC building codes required that it be covered in fireproof material. That would ruin the esthetic, so to give the impression of an exposed frame, he applied non-structural, bronze-toned I-beams to the outside. 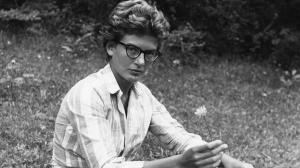 It is thirty–eight stories tall and is among the finest examples of the functionalist aesthetic and corporate modernism. It would have been more ordinary hadn’t the CEO’s daughter involved herself in its planning. Recently divorced and studying art in Paris, Phyllis Lambert heard of her father’s plans to build what she considered a totally unremarkable company headquarters. She sent him a letter arguing for a more notable building, and convinced him to change his mind. Being the bosses daughter has its advantages, and she had the opportunity to work with Mies on the project, which led to her becoming an accomplished architect.

Like Lever House, the edifice has had enormous influences on American architecture.

In the early eighties, everyone was wearing Trench Coats, many of which were made by a company called London Fog.

In those days, Seagram Distilling used to have an annual Christmas party which was held in a large ballroom at their corporate headquarters on Park Avenue. Bars were set up in all four corners, and of course there was plenty of booze and non-stop delivery of quality Hors d’oeuvres. At the time, it was considered pretty lavish.

In the lobby were rows of self-serve coatracks for the hundreds of guests that attended, which was where I hung my beige London Fog before joining the party.

The affair was scheduled to end at eight or nine, but the group I was with wanted to leave early. I didn’t want to go, but for some reason felt compelled to leave with them. When I went to retrieve my coat, to my dismay I discovered that it was gone. It was late December and rainy and cold, so I needed a coat — not to mention that I didn’t want to buy a new one.

But then inspiration struck. Rather than just steal some other poor slob’s coat (I admit, it crossed my mind), I would stay at the party until only one trench coat remained. That way, I’d have a coat for the trip across town, and maybe there would be a nametag or something inside that would allow me to contact its owner and arrange a switch. You never know.

As an added benefit, I got to stand around the bar for another hour or two, eating fancy Hors d’oeuvres, drinking top shelf liquor and having a delightful time. As the night wore on, the crowd thinned and I periodically checked the coatracks. Finally, with a few stragglers remaining, only one was left.

I could tell something was wrong the moment I lifted it from the rack: it was way too light. When I put it on, the sleeve was tight and came nearly to my elbow. As I struggled to put my other arm in, I could feel the fabric stretching across my back, and I half expected to rip it open like when David Banner changed into the Incredible Hulk. I could only secure a button or two, and its length reach only to mid-thigh. I looked ridiculous, but wearing it was my only option.

Wet and frozen, I made my way to the Port Authority and silently cursed the drunken fool who I imagined staggering down the streets of New York, dragging my coat behind him like a bride’s train, its sleeves so long they would have covered his freaky little hands and made buttoning it impossible. How could he have mistaken my coat for his? He was the size of a ten year old!

But I made it home and before discarding it, thoroughly checked it for any scrap of paper that might lead me to its owner. I so wanted to talk to this guy. Maybe he could say something that would explain everything — something I hadn’t considered. Sadly, there would be no such explanation — the pockets were empty.