No one understands why or how, but occasionally large groups of people start doing the same thing, or liking it, or wearing it, or eating it, or believing it.

Beginning a few years ago, I noticed that when some people were asked a question, they started their answers with “so.” It probably started on the Sunday morning talk shows, and then spread across the rest of the broadcast media until you can now expect it if you ask someone for the time: So, it’s…eleven thirty.

There’s nothing new about using “filler” words at the beginning of an answer, the theory being that the speaker is stalling for time. It’s like the old grammar school ruse of beginning an answer by repeating and embellishing the teacher’s question.

Teacher: Mr. Nolan, can you explain the three primary exports of Bolivia?

Me: Yes. The three primary exports of Bolivia, a South American country whose climate is similar to ours, are : bauxite, fresh cut flowers and anchovies.

(This shows that the slight pause only helps if you know the answer and just need a little extra time to dig it out of memory.)

The most popular filler word at the beginning of a sentence is “Well,” which doesn’t make sense when you consider that the word is meant to denote a favorable condition, state of being or outcome — or a place from which to draw water.

The people who write dictionaries acknowledge this in their most subordinate citations by saying: It’s employed when pausing to consider one’s next words.

True enough, but that could apply to any of the similarly used non-words, such as “Hmmm,” and “Uhh,” the latter of which we learn pretty early-on to avoid because there’s always some little prick eager to mock us by making us sound like Lenny from Steinbeck’s Of Mice and Men.

I asked around a bit to see if any of my acquaintances were aware of the “so” trend, and got the feeling that this change had passed unnoticed into the culture — but I was wrong. As far back as 2010, a few publications took note.

The New York Times article offered a few explanations. Linguistics scholar, Galina Bolden, opined that it’s about the culture of empathy, and its use signals that your explanation has been chosen for its relevance to the listener. Maybe for some, but I don’t think there are too many people thinking that much about what’s relevant to anyone except themselves.

Another theory is that it started in Silicone Valley and has something to do with how computer programmers answer questions, and the growing influence of our data-driven culture. The writer of the piece, Anand Giridharada, opined that it’s use has the “whiff of logic to relay authority,” and conveys an “algorithmic certitude that suggests there is a right answer, which the evidence dictates and which must not be contradicted.”

That sounds logical and leads nicely into what Ben Yagoda wrote in the Chronicle of Higher Education in 2011, that when people use it, the underlying message is: “I understand the question and how it displays your incomplete knowledge of the subject. What follows is an answer that will help you comprehend what’s really going on and, in addition, suggest a unified theory of the reality.”

I’m sure some people are consciously trying to impart such a message when they start answers with “so,” but most aren’t that guileful. I tend to agree with Doctor Penelope Gardner-Chloros, from the department of applied linguistics and communication at London’s Birkbeck College, who was quoted in the Spectator: “We accommodate, and converge with the group of people we want to belong to. Someone using “so” like this may well be doing it because they’ve heard other people doing it. It spreads like the flu.” 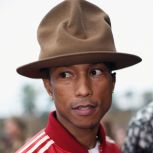 This hat speaks for itself

So, in other words, people do this for the same reason they do almost everything: they want to fit in. The way we talk has a fashion of its own, with phrases and expression going in and out of style. It’s no different than running out for one of those traffic-stopping Smokey Bear hats that Pharrell William’s wore to the Grammy’s. We have the idea that conformity is all that stands between ourselves and the acceptance of our peers.

When we were kids, sometimes you’d say something to a playmate and they would answer: “So?” which was intended as an insult. For example:

Me: Hey, Steve, my uncle is going to take me to the Yankees game this Friday.

This is kid-speak for “I don’t give a damn,” or “Who gives a you-know-what?” The best way to reply to this slight (even as an adult — especially as an adult!) is to smile and answer calmly: “Go sew your mother’s girdle.”

Of course, this is kid-speak for “F” You, and I so treasure the few opportunities I get these days to employ it.

One last thing, the cartoon above is from the film Of Fox and Hounds, which came out in 1940, which was voiced by Tex Avery and Mel Blanc. It’s the first time Tex Avery used characters based around George and Lenny of John Steinbeck’s Of Mice and Men.